Pho has long been a national traditional dish of Vietnam, Pho also has many types but perhaps most famous is the bowl of beef noodle soup in Hanoi.

The origin of Pho

Pho is often thought to be shaped in the early 20th century. There are two different opinions about where pho first appeared in Vietnam, that are Nam Dinh and Hanoi, where this dish became popular. On the origins of the dish, there was a view that phở originated from a Cantonese dish called “ngau yuk phan”. It was also suggested that pho is derived from “buffalo meat soup” (using vermicelli) of Vietnam, then being transformed into “beef soup” using “banh cuon” (steamed rolled rice pancake). Another theory is that pho is derived from the French beef pot-au-feu (French pronounced like “pɔ.to.fø”) combined with spices and herbs in Vietnamese cuisine.

And although there are many theories about the deep roots of pho, one thing is certain: Phở originates in North Vietnam. This dish migrated to the Central and the South in the mid-1950s, after the defeat of France in Indochina and Vietnam was divided into two regions. The northern Vietnamese migrated to the South in 1954 carrying pho in and pho began being difference between regions.

Today, pho has different processing methods and flavours. In Vietnam, there are different names to distinguish them: Pho Bac (Northern Pho), Pho Hue (Central Pho) and Pho Saigon (Southern Pho). Normally, the northern pho is characterised by salty taste and the south is sweet and rich in vegetables. Noodle strip in the south is smaller than in the north.

Previously, there was only beef noodle soup with well-done beef slices, later there were also with medium beef slice or chicken. Going further, there are experiments with duck meat, but not much success. There are also some types of pho transformed from traditional noodles such as pho rolls, stir-fried pho in 1970s, deep fried pho in the 1980s...

Thach Lam writes in his book "Ha Noi with 36 streets and wards ":

"Pho is a special dish of Hanoi, not because only Hanoi has it, but only Pho in Hanoi is the most delicious." Delicious pho must be the "classic" pho, cooked with beef, "the broth is clear and sweet, the noodle strip is flexible but not crushed, the beef is crunchy but not chewy, and the accompaniment of chilli, lemon, onion, fresh herbs and black pepper makes it just right ”. In the 1940's, pho was very popular in Hanoi: "It's a daily dish throughout the day for everyone, especially civil servants and workers. People eat pho at breakfast, lunch and dinner... ".

From the mid-1960s to the early 1990s of the 20th century, for the most reason, the subsidised food system in Hanoi and many northern provinces, appeared "unmanned noodle "(no-meat noodle) in state-owned trading outlets. In the 1990s, pho was richer and Hanoians often ate noodles with “quẩy” (long golden-brown deep fried strip of dough). In Hanoi, pho is a special dish of Hanoi people and eaten as a breakfast, lunch or dinner. Phở noodle soup is made from slow cooked broth of beef bones. Meat for noodle can be beef or chicken. Noodle strips must be thin, soft and flexible, the spices of pho are fresh herbs, spring onions, black pepper, chilli vinegar, lemon slices. 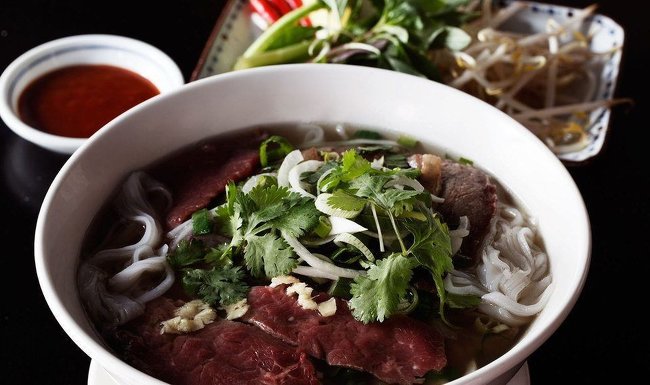 True to Vietnamese cuisine tradition, Cay Tre's speciality and home-grown creation is our famous ‘Phở’ with broth simmered for at least 24 hours and creating an impressive pho menu at our Soho and Hoxton, Shoreditch establishments. Want to try our pho today? Why not order via Deliveroo now to get pipping hot ‘Phở’ delivered to your door step within 30 mins. Enjoy!

Pho has long been a national traditional dish of Vietnam, Pho also has many types but perhaps most famous is the bowl of beef noodle soup in Hanoi....
Read More
All Posts